I would like to introduce you to my new roommate, Simon. Yes, I named my plant. I really like him so I clearly had to 😊

Simon has a special story to go along with him. It started on Monday when we went during experiential to pick out succulents. I really like the way this type looked and apparently it can also flower. We worked on the second half of the project yesterday. 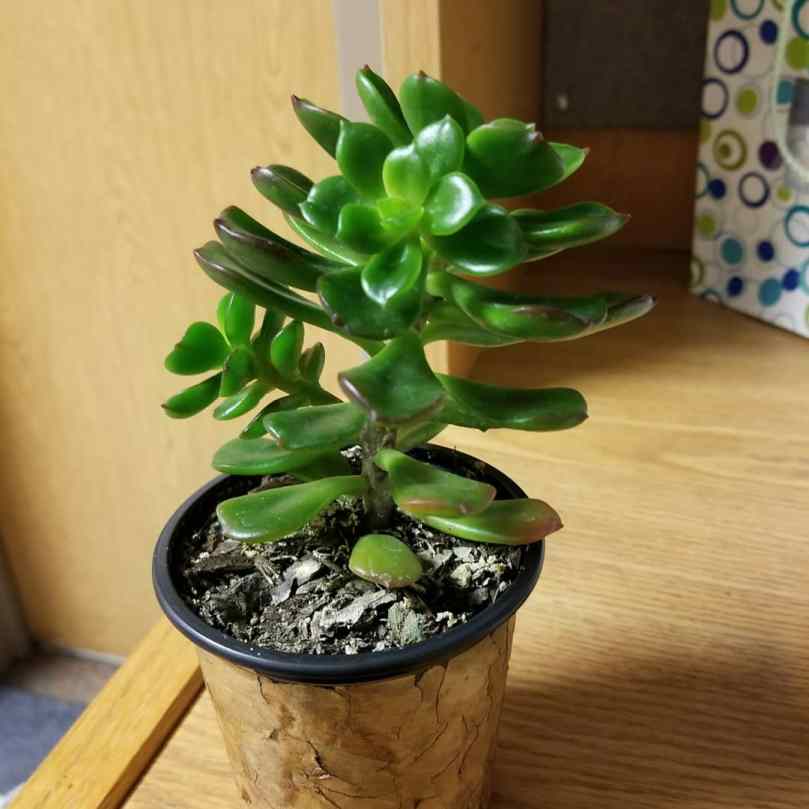 If you look at the pot he’s in, you’ll notice that it looks cracked. We made them like this to represent ourselves in a way. K read us the following story and then we talked about what our cracks were.

A water bearer in India had two large pots, each hung on the end of a pole which he carried across his neck. One of the pots was perfectly made and never leaked. The other pot had a crack in it and by the time the water bearer reached his master’s house it had leaked much of it’s water and was only half full.

For a full two years this went on daily, with the bearer delivering only one and a half pots full of water to his master’s house. Of course, the perfect pot was proud of its accomplishments. But the poor cracked pot was ashamed of its own imperfection, and miserable that it was able to accomplish only half of what it had been made to do.

After two years of what it perceived to be a bitter failure, it spoke to the water bearer one day by the stream. “I am ashamed of myself, and I want to apologize to you.” “Why?” asked the bearer. “What are you ashamed of?” “I have been able, for these past two years, to deliver only half my load because this crack in my side causes water to leak out all the way back to your master’s house. Because of my flaws, you have to do all of this work, and you don’t get full value from your efforts,” the pot said.

The water bearer felt sorry for the old cracked pot, and in his compassion he said, “As we return to the master’s house, I want you to notice the beautiful flowers along the path.”

Indeed, as they went up the hill, the old cracked pot took notice of the sun warming the beautiful wild flowers on the side of the path, and this cheered it some. But at the end of the trail, it still felt bad because it had leaked out half its load, and so again the pot apologized to the bearer for its failure.

The bearer said to the pot, “Did you notice that there were flowers only on your side of your path, but not on the other pot’s side? That’s because I have always known about your flaw, and I took advantage of it. I planted flower seeds on your side of the path, and every day while we walk back from the stream, you’ve watered them. For two years I have been able to pick these beautiful flowers to decorate my master’s table. Without you being just the way you are, he would not have this beauty to grace his house.”

I love this story and what it can teach us. It allowed me to look at some of my qualities that may be seen as cracks or weaknesses but can actually create goodness in my life and the lives of others. I am very stubborn, which can definitely be a bad thing if you’re my therapist and I really don’t want to do something, but I can also use it to pursue my goals no matter what. My eating disorder and mental health are struggles I never would have wished upon my worst enemy. Without them, I wouldn’t have a story to share, a drive to promote awareness, or a level of compassion and empathy that can only come from someone who has lived through very hard things. Being a perfectionist means I am hyperaware of how I do every little thing and that if it isn’t perfect, I can’t even consider it good. Dr. C often tells me she’s glad I have the detail-oriented traits because it will truly take me far in nursing.

I want to set an intention to embrace these flaws more. I am broken, but beautiful. So are you ❤

What are some of your cracks and how could you embrace them?

3 thoughts on “The Cracked Pot”